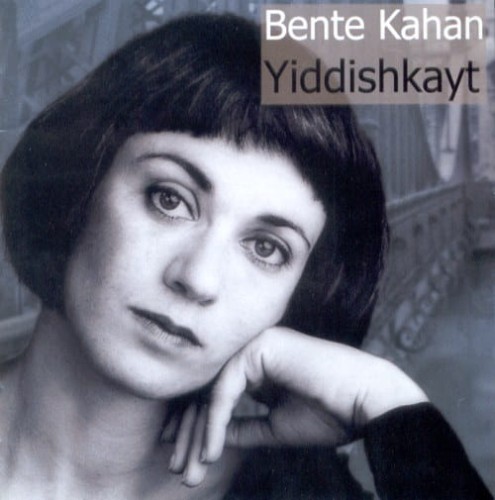 YIDDISHKAYT  is a concert by the Norwegian-Jewish actress and singer, Bente Kahan, and  Gjertrud's Gypsy Orchestra, which was first performed in April 1990.  Its Yiddish repertoire ranges from Jewish sacred music to folk songs and also includes the musical material created for the Yiddish theater, which had its beginnings in 19th century eastern Europe and continued to flourish in the USA and Israel with the emigration of East European Jewry to those countries.  Yiddish music, although firmly planted in Judaic cultural traditions, was also influenced by Polish, Russian and Balkan folk music, as well as American blues and musicals. It is natural, therefore, to place the Yiddish language, literature, song and music within a European and North American cultural context.  Today, when a dwindling number of people speak and understand Yiddish, the responsibility of preserving this cultural treasure for future generation is more pressing than ever.

BENTE KAHAN  born in Oslo in 1958, is today one of the leading Jewish performers in Europe. Trained as an actor in Tel-Aviv and New York, she has been working as a performing artist since 1981. She began her career in the classical theatres of Habima, Israel's national theatre, and Nationaltheatret in Norway.
Her first Yiddish performance was in Oslo, in 1983 (also with Georg Reiss and Tom Karlsrud, both of whom may be heard on this CD).  After several years as a member of diverse Oslo ensembles, she performed in the monodramas "Bessie - a Bluesical" and "Letter Without a Stamp", both co-written with the Norwegian stage director Ellen Foyn Bruun.
In 1990, she founded Teater Dybbuk - Oslo (TDO), the producer of all her concerts, monodramas and CDs whose aim is to convey Jewish-European culture and history through drama and music. Among the most well known are: "Yiddishkayt" (a concert and CD), "Farewell Cracow" (a concert and CD), "Voices from Theresienstadt" (a stage play and CD in German, English and Norwegian versions) and HOME (a concert and CD).

Her collaboration with Gjertrud's Gipsy Orchestra on "Yiddishkayt" has been followed by link-ups with other European klezmer bands, such as Di Gojim (The Netherlands), Jowel Klezmorim (Germany) and "Sabbath Hela Veckan" (Sweden).
However, the musical input to most of TDO's productions arises from Bente Kahan's association with the two Polish musicians Dariusz Świnoga and Mirosław Kuźniak. They have worked with Ms. Kahan since 1992 and accompany her in most of her productions.
Bente Kahan frequently tours with her diverse programs, appearing on prestigious stages in many countries. She is repeatedly called upon to perform in connection with official commemorations paying homage to the victims of the Holocaust. Her work unfailingly receives critical praise by major European newspapers and audiences alike.

BENTE KAHAN sings the poetry of TADEUSZ RÓŻEWICZ - Only A Human Being
Price: €12.03